Martin Lines farms 165ha of winter cereals in partnership with his father at Eltisley near St Neots in Cambridgeshire. The farm is in ELS and HLS with stewardship options that meet the Farmland Bird Package. Over and above the land in these agreements, Martin ensures at least 2ha each year are in the Campaign for the Farmed Environment’s Voluntary Measures. This includes things like grass margins, wildflower enhanced margins, wild bird seed mix and unharvested conservation headlands followed by spring fallow.

This is done partly for the ease of farming the land, so that cropping fits in with the spacing of tramlines, but the main driver for Martin is the fantastic increases in farmland birds he has witnessed in recent years, backed up by bird surveys. 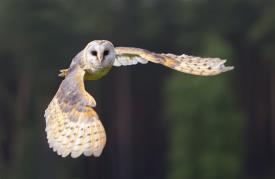 A particular success this year has been the barn owls at Papley Grove Farm. Only seen occasionally on the farm before, numbers have literally soared. Two years ago Martin and a friend made and installed three barn owl boxes under his HLS scheme. This summer, Martin ringed four chicks in one box, three in another and found the third box to contain a total of seven chicks. Unfortunately only 6 of these chicks were ringed, as one was too small to be viable, but the consolation was that a second brood later appeared in one of the other boxes!

"Simply installing a few barn owl boxes produced 16 healthy owlets in one season on our farm," said Martin, "it was incredibly rewarding".

Martin’s passion shines through when he describes his farm: "One evening a few weeks back we were sitting in the garden and we saw a pair of barn owls flying over the field, as well as a pair of tawny owls, while we listened to a little owl screeching in a nearby tree. That is such a pleasure.

"We had turtle doves nesting this year and last and we would see them feeding in the yard. These birds are really rare now! Once you start realising what you have got you feel compelled to do that bit extra."

"And it doesn’t take much here and there to make a difference. It’s just doing what you can and being conscious of management. Instead of cutting all our hedges and ditches at once, we rotate the management for the ones we can, cutting them well after Christmas so they can offer fruit and shelter for much longer. This also works for the farm, because it gives us times to get on with other things in the busier months.

"It’s the same with our grass margins. We have 3 to 6m margins - some voluntarily enhanced with wildflowers - round every field, allowing us to access fields and manage hedges and ditches flexibly. The margins work for the farm and for wildlife." The small mammals that barn owls prey on require the tussocky habitat offered by grass margins and field corners. Martin also manages some of the margins on the farm to encourage native wildflowers, including primrose and cowslip and the bluebells which spill out from under ancient hedgerows. 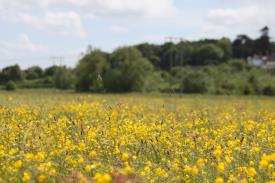 Martin also voluntarily uses tailings, sweepings and corn screenings as supplementary feed for birds on the farm. "I dot them about the place - on tracks and near hedges for shelter - on a fortnightly basis. I just put out what they seem to use, depends what they are eating at any particular time of year."